Artists from around United Kingdom rally to Palestinian cause 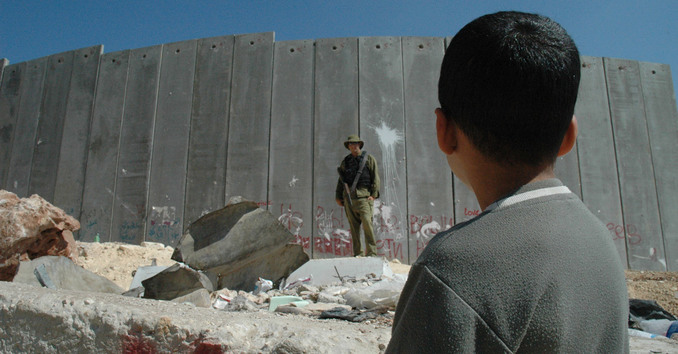 LONDON, UK - More than a hundred artists, authors actors, screenwriters, musicians, producers and others in the arts in the UK have signed a letter stating they will not visit Israel, or support any organisation that receives funding from Israel.

The letter has been published in The Guardian newspaper. The more than 100 signatories in the official letter have been supplemented by several hundred more artists from across the UK.

"Along with more than 600 other fellow artists, we are announcing today that we will not engage in business-as-usual cultural relations with Israel," the letter published by The Guardian stated. "We will accept neither professional invitations to Israel, nor funding, from any institutions linked to its government. Since the summer war on Gaza, Palestinians have enjoyed no respite from Israel's unrelenting attack on their land, their livelihood, their right to political existence. "2014," says the Israeli human rights organisation B'Tselem, was "one of the cruellest and deadliest in the history of the occupation." The Palestinian catastrophe goes on," the letter states

"Israel's wars are fought on the cultural front too. Its army targets Palestinian cultural institutions for attack, and prevents the free movement of cultural workers. Its own theatre companies perform to settler audiences on the West Bank and those same companies tour the globe as cultural diplomats, in support of "Brand Israel," the artists said in their letter. "During South African apartheid, musicians announced they weren't going to "play Sun City". Now we are saying, in Tel Aviv, Netanya, Ashkelon or Ariel, we won't play music, accept awards, attend exhibitions, festivals or conferences, run masterclasses or workshops, until Israel respects international law and ends its colonial oppression of the Palestinians." The signatories and the other 600 artists that have supported the boycott can be seen at www.artistsforpalestine.org.uk.

"I have worked with artists in Palestine for nearly 20 years and I have seen first hand the hardship, suffering, and injustice that the Palestinian people have had to endure," Elyse Dodgson MBE, International Theatre Director said in explaining the decision to be a signatory.

"As a South African I witnessed the way the cultural boycott of South Africa helped apply pressure on the apartheid government and its supporters. This Artists' Pledge for Palestine has drawn lessons from that boycott to produce an even more nuanced, non violent way for us to call for change and for justice for all. That is why I support this pledge,' writer Gillian Slovo said.

"As the son of a Jewish refugee, the anger and despair I feel can only faintly echo that of the people of Gaza. Art is a celebration of humanity, and the symbolic gesture of refusing any artistic collaboration with a state which values its own contribution to the arts so highly is the least we can do to protest against the horrifying inhumanity of its actions," said film director and screenwriter Michael Radford.

"I ask Israel to turn the other cheek, keep your word and forget playing to the politics of selfishness, so that the real world, of which artists are a part, can do the right things to help end this hideous criminal anger that Israel is displaying," said documentary filmmaker, writer and teacher Paul Watson.

"I'm happy to lend my support for this, as I am sure the vast majority of people worldwide do against the shameful and inhuman actions of the Israeli military in Gaza and sadly so many other atrocities against people innocent or otherwise by governments around the world in recent months. Please add me to the petition as publicly as is helpful to the cause," said Kit Hammonds, independent curator and senior tutor in contemporary art at RCA.

"We absolutely cannot plead ignorance of the fact that this is genocide of the Palestinian people. The one-sided, often blatantly wrong reportage in the west is not just about bad journalism and ugly domestic agendas this sort of response to injustice to protect the economic and political status quo fosters a loveless world. If the footage of wounded children and their desperate parents, bombings of schools and funerals that reaches us every few hours, can't open our hearts and show us the consequences of apathy and playing political over human agendas then it is a scary time we live in," Rita Kalnejais, theatre and film writer was quoted as saying. "I believe that people are good but sometimes our goodness gets confused by fear and extremism. This is one such time and it is a small step towards taking responsibility for allowing these Israeli military attacks to go unchecked to boycott economic and cultural exchanges with Israel."

Guy Sherwin, film artist/performer and teacher called in Israelis to rise up against their government. "Whatever happened to empathy in the Jewish story? Ordinary Israelis, rise up against your warmongering leaders whose actions are wholly lacking in imagination," he said.

"I support the application of absolutely any pressure that can be put on the Israeli government to end their illegal occupation of Palestine, remove the blockade of Gaza, and evacuate the Israeli settlements on Palestinian land. Only then can we begin to address the long-term issues of equality between the Arab and Jewish populations," Douglas Robertson, photographer said.

"This inhumane stranglehold over the dignity and day-to-day existence of the Palestinian people must be dissolved. If by adding my signature to this pledge, I can add my support for a struggling nation to the rippling groundswell of opinion, if it will help to reanimate hope for a trauma free future, help even one child to enjoy their childhood without constant fear of punishment or incarceration, then I feel it's worth it," said actor Norma Cohen. "To be a working artist means to care about injustice on a personal and international level. Not to speak out is to be complicit in an unjust, racist mindset. This particular boycott, supported by many voices around the world, could be a powerful tool in helping to create a new paradigm based on equality and justice, rather than power and paranoia. Not in my name."

Palestinian groups first called for a boycott in July 2004 after the historic Advisory Opinion of the International Court of Justice (ICJ) which found Israel's Wall built on occupied Palestinian territory to be illegal.

Palestinian Civil Society in July 2005 followed this up with a more formal call for a boycott, reciting:

"Whereas Israel's colonial oppression of the Palestinian people, which is based on Zionist ideology, comprises the following: Denial of its responsibility for the Nakba in particular the waves of ethnic cleansing and dispossession that created the Palestinian refugee problem and therefore refusal to accept the inalienable rights of the refugees and displaced stipulated in and protected by international law; Military occupation and colonization of the West Bank (including East Jerusalem) and Gaza since 1967, in violation of international law and UN resolutions; The entrenched system of racial discrimination and segregation against the Palestinian citizens of Israel, which resembles the defunct apartheid system in South Africa; Given that, since 1948, hundreds of UN resolutions have condemned Israel's colonial and discriminatory policies as illegal and called for immediate, adequate and effective remedies; and

Given that all forms of international intervention and peace-making have until now failed to convince or force Israel to comply with humanitarian law, to respect fundamental human rights and to end its occupation and oppression of the people of Palestine; and

In view of the fact that people of conscience in the international community have historically shouldered the moral responsibility to fight injustice, as exemplified in the struggle to abolish apartheid in South Africa through diverse forms of boycott, divestment and sanctions; and

Inspired by the struggle of South Africans against apartheid and in the spirit of international solidarity, moral consistency and resistance to injustice and oppression;

We, representatives of Palestinian civil society, call upon international civil society organizations and people of conscience all over the world to impose broad boycotts and implement divestment initiatives against Israel similar to those applied to South Africa in the apartheid era. We appeal to you to pressure your respective states to impose embargoes and sanctions against Israel. We also invite conscientious Israelis to support this Call, for the sake of justice and genuine peace.

These non-violent punitive measures should be maintained until Israel meets its obligation to recognize the Palestinian people's inalienable right to self-determination and fully complies with the precepts of international law by:

1. Ending its occupation and colonization of all Arab lands and dismantling the Wall

2. Recognizing the fundamental rights of the Arab-Palestinian citizens of Israel to full equality; and

3. Respecting, protecting and promoting the rights of Palestinian refugees to return to their homes and properties as stipulated in UN resolution 194."