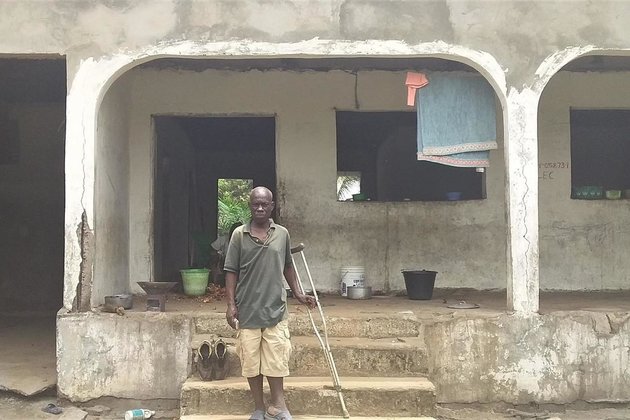 Lawyers representing victims of one of the deadliest massacres in Liberia presented evidence to a judge in the United States this week for the prosecution of Colonel Moses Thomas, the former head of an elite unit within the Armed Forces of Liberia.

Thomas is accused of being responsible for the Lutheran Church massacres in 1990.

Lawyers from the Center for Justice and Accountability (CJA) for four of the victims are asking the court in the US state of Philadelphia to find Thomas liable for crimes against humanity. They also want the victims to be awarded damages.

In July 1990, the single worst atrocity of the Liberian Civil War occurred at the St. Peter's Lutheran Church and an estimated 600 people-mainly women and children-were shot and chopped to death by soldiers of the Armed Forces of Liberia (AFL).

The civilians, predominantly from the Gios and Manos ethnic groups had gone to seek refuge in the church's compound on 14th Street in the Sinkor neighborhood, Monrovia, as the war reached the capital.

Rufus Kartee, 52, was 21 and in the church compound sheltering from the violence in the capital when the massacre began. Recounting his ordeal to RFI, Kartee said he preferred to die instead of living in pain and agony for several years.

"On the night of July 29, we heard a scuffle at the gate of the church and later we saw soldiers wearing face masks forcibly entering," said Kartee.

"The private security guys who were mending the gate were killed by government forces-the Armed forces of Liberia and the Special Anti-Terrorist Unit-SATU," he said.

He sustained a gunshot wound to his knee and lower back. Since then he says he suffers pain when he walks.

The wounds on Kartee's left leg and buttocks have still not healed. Yet he says he is fortunate that he did not lose family members in the massacre as others did.

His wife had refused to seek refuge at the Lutheran church after soldiers killed scores of civilians at United Nations headquarters, then in Congo Town.

He lives in an unfinished building within the Soul Clinic community in the Paynesville community outside Monrovia.

Abandoned by his wife and other relatives, Kartee now depends solely on handouts from neighbors to survive.

"See my condition, I am suffering. The pain is too much for me because I am now living on painkillers. These sores on my leg and buttocks have not cured since the incident. No help ... I am hopeless," said Kartee.

He says he hopes that he can get advanced medical attention for his health issues.

Peterson K. Sonya, who was 16 on that fatal day, says benches were placed behind the church doors to prevent the soldiers from entering.

"They forced their way in and opened fire. People were pleading for mercy but they didn't listen. I saw my father fall over me and other people fell over us. That's how I survived," he said.

Sonya lost seven members of his family in the massacre and to date, he says the survivors have not been taken care of by the government, or anyone.

The victims are buried in three locations in the churchyard in mass graves.

And no one has been held accountable. This week's filing in the US is the first attempt to prove that the Liberian government's armed forces were responsible.

Thomas moved to the United States in 2000 while the civil wars continued in Liberia and was a long-time Philadelphia resident before the case was filed.

Never too late to prosecute

Sonya is angry that the Liberian government is dragging its feet to prosecute warlords and their financiers responsible for the mayhem during the civil war, but is happy that at least something is happening now.

"I think this is a welcoming move. This has been our dream, it has been our prayers to be alive and see people held accountable to what happened to us," Sonya said.

He adds that it is never too late to prosecute those responsible for massacre that has changed their lives negatively.

Sonya works with a group of survivors under the banner the St. Peter Lutheran Church massacre. He says the majority of the massacre victims are living in zinc shacks and are left to struggle daily for survival.

Among those struggling financially, medically and psychologically is Marie Saye, who suffered gunshot wounds on her right hand during the massacre.

"My husband and two sons including my little sister were killed in the massacre," said the 54-year-old. "See how I am suffering! No help, what did we do to deserve this?"

She said she wants the government and the international community to act with urgency and give them justice for once in their lifetime.

Moving on after the tragedy is difficult

The associate pastor of St. Peter's Lutheran Church where the massacre occurred welcomes the legal proceedings.

"Our God is a just God, so we are thankful to those who continue to push this and to bring those perpetrators to justice," Rev. Kenety S. Gee told RFI.

He said while they welcome the legal process, over the years the church has also asked the survivors to forgive those who committed the act.

"It is not uncommon to lose your father, brother or relative to death but to see it being done violently is sad," said Gee.

"We as a church have been encouraging them to find a place to forgive and we as a society can move on and start the process of rebuilding."

He says that part of the process is helping the survivors to learn new skills so they can take care of themselves and their families.

"With the severe disabilities that most of them have, it makes it very difficult for some of them to live so society has to intervene here because it is the society that imposes on them the undue suffering," said Gee.

The church has helped them organise the massacre association where Sonya works and has provided some training in soap making and tailoring for the survivors and their children.