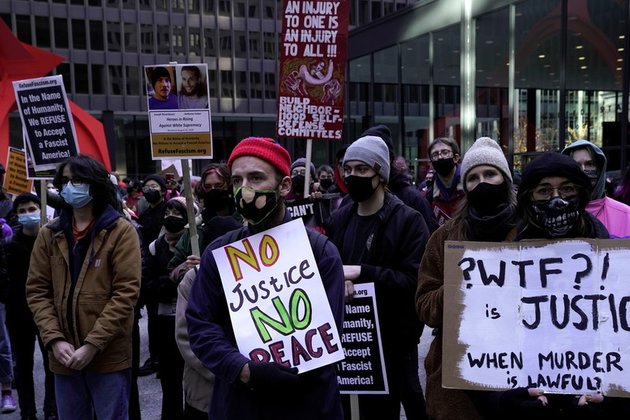 After being cleared of murder charges by jury trial, Kyle Rittenhouse now hopes to attend college. Yet campus radicals are already demanding his cancellation, proving that courtroom justice is irrelevant for many.

After surviving a high-profile show trial that diverted wildly from the 'white supremacist' script carefully crafted by the media industrial complex, Kyle Rittenhouse wants his life back.

He wants to go back to doing the normal things that ordinary, non-racist teenagers do, like getting a part-time job, perhaps, and living in a dorm on a college campus. But because he committed the 'crime' of being a white guy who successfully defended himself - with a gun - against the Democrat Party's favorite constituency, The Mob, Rittenhouse will suffer indignations for the rest of his life, or until the woke demons are exorcised from the nation.

Exhibit number one: Arizona State University (ASU), where Mr. Rittenhouse has dreams of enrolling for a degree in nursing. Sounds harmless enough, but the campus radicals at ASU are having none of it. Weird-sounding groups like 'Students for Socialism' and 'Multicultural Solidarity Coalition' are demanding that ASU administrators "protect students from a violent, blood-thirsty murderer."

Exactly what part of 'innocent' do these university students not understand? Even if they did not watch one minute of the trial, a cursory viewing of the Rittenhouse shooting footage shows the teenager clearly fired his weapon out of self-defense. And the argument that the entire legal system is 'racist', rigged to work in favor of 'privileged' white people, does not stand up to scrutiny considering the outcome of recent court cases, including the Ahmaud Arbery murder trial. Eleven white jurors and one African American - the same race ratio in the Rittenhouse jury trial, incidentally - found three very white men guilty in Arbery's murder.

Meanwhile, Derek Chauvin, the white police officer accused of killing George Floyd during an arrest, was found guilty by a jury of six white people and six people of color and sentenced to 22.5 years in prison by a white judge.

Somehow, none of that sounds like a country suffering from 'systemic racism'.

Kyle Rittenhouse's acquittal has touched a raw nerve on the left, because he embodies those qualities that have come to define the stereotypical image of the average conservative: independent-minded, armed to the teeth, and a shade whiter than Town Talk bread. In the slanderous words of Joe Biden, playing second fiddle to the Maoist faction of the Democratic Party, Mr. Rittenhouse is an unapologetic "white supremacist."

Consider the following: When a young white man defends himself from a frenzied mob with a firearm, he is branded a "white supremacist" - even though the three men he shot, two fatally, just happened to be white as well.

Now compare that to the coverage of Darrell Brooks, a black man and the main suspect after an SUV attack on a Christmas parade at Waukesha, Wisconsin. The media propagandists, like CNN, immediately went to bat for Mr. Brooks, declaring "a car" to be the perpetrator of the "accident." In fact, CNN never once mentioned in its report the race of the perpetrator.

The very notion of an "armed white man defending himself against protesters" is so full of hair triggers it could bring down the entire left like controlled demolition. If Democrat-controlled cities actually fired entire police forces to make way for social workers to handle violent crime, did Kyle Rittenhouse believe he'd get special consideration by protecting himself with an AR-15 semi-automatic rifle, as is his constitutional right?

Lest we forget, white people, who are defined by critical race theorists as being incurably and unapologetically bigoted, have no business defending themselves from an unruly mob - which, in Rittenhouse's case, contained a high number of left-leaning white people - whose lust for arson, vandalism, and general mayhem is motivated by only the highest ideals, particularly the vilification and disenfranchisement of white people.

Due to the severity of the Rittenhouse case, with its high potential for sparking even more protests, it was absolutely imperative that the media get the story straight. Naturally, they failed in glorious Russiagate style. Not only did the media regularly bury the news that the men Rittenhouse shot and killed were of the pale-faced tribe, but in one case the individuals, thanks to some crack fact-checking at the Independent, were actually described as "three black men." Why do such 'mistakes' hardly ever occur in reverse to the advantage of conservatives?

Meanwhile, the ubiquitous liberal forces at play inside of Big Tech were also hard at work propping up the false narrative that Rittenhouse was not a Boy Scout, so to speak. Facebook, for example, refusing to allow even legal experts to comment with regards to the self-defense argument, announced, "We've designated the shooting in Kenosha a mass murder and are removing posts in support of the shooter." This is just the latest example that Big Tech is insufferably plagued by political bias, which makes it incapable of being a fair arbiter of impartial content.

Under such circumstances, if a 'man on the street' survey was to be taken on the campus of Arizona State University, I'd wager that most students would reply that Rittenhouse shot and killed black men.

Kyle Rittenhouse, much like Nicholas Sandmann before him - who was wrongly portrayed in the media as a white racist after a confrontation with an indigenous man - may get another day in court to defend his name against the lies and deceptions of the mainstream media, which effectively depicted him as a menace to society. Whatever the outcome of any future trial, though, the damage is done as far as his reputation is concerned. The media and academia, not to mention the highest levels of government, have become so hostile to whites in America that the prospects for impartial court cases have become nearly impossible.

For Kyle Rittenhouse, however, just being able to enjoy the remainder of his teenage years after such a traumatic experience, made worse by egregious media bias and prejudice, will be the ultimate challenge.