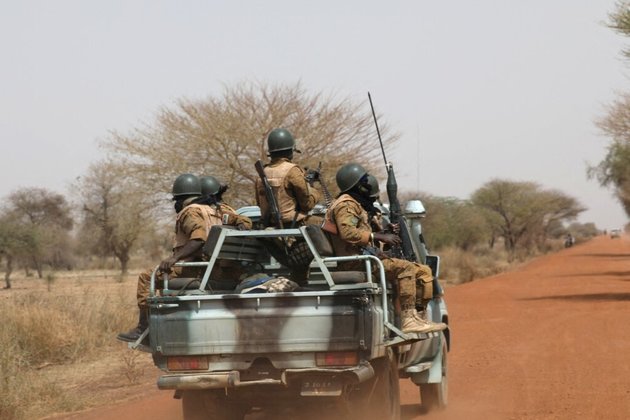 WASHINGTON - Western diplomats fear the spread of extremist groups and persistent economic and social problems in Western Africa and the Sahel are nearing a tipping point that could have disastrous consequences for the region and beyond.

The officials from both Europe and the United States warned Thursday that international efforts have so far failed to counter factors that are driving young people to take up arms and called for increased cooperation with countries in the region. 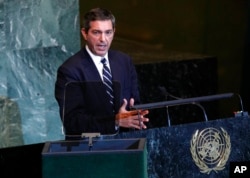 'The rise of violent extremism and the worsening of the humanitarian situation in the Sahel and the wider West African region is threatening the future of the entire African continent and of all of us,' European Union Ambassador to the U.S. Stavros Lambrinidis told the virtual conference. 'This is as high stakes as it gets.'

U.S. officials described the situation as no less dire.

'Despite a decade of robust international investments, the region continues to trend in the wrong direction,' said U.S. Deputy Assistant Secretary of State Michael Gonzales.

'Armed groups continue to expand their presence as well as their capabilities and their violence,' Gonzales added. 'We need to address the underlying drivers of insecurity more holistically in order to turn the tide.'

The biggest concern has been Mali, where terrorists linked to groups like Islamic State and al-Qaida have continued to make inroads, and where the military government, which seized power in August 2020, postponed elections scheduled for this February until 2026.

Earlier this week, the Economic Community of West African States (ECOWAS) imposed a series of sanctions against Mali's interim government for refusing to hold elections as initially agreed, including the suspension of all commercial and financial transactions, and putting financial assistance on hold.

The EU on Thursday announced it would follow suit with its own sanctions against Mali's interim government. 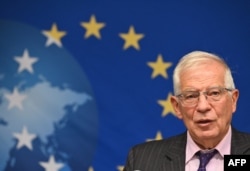 'Despite all the warnings that we made to the Malian authorities, we see no sign of progress on the part of these authorities,' EU foreign policy chief Josep Borrell said following a meeting with the EU defense minister in the French city of Brest.

'The risk that the situation in this country [Mali] continues to deteriorate is evident,' he said. 'We will follow the situation closely.'

Borell said that despite the imposition of sanctions, EU missions to Mali to train and advise Malian armed forces will continue.

Mali's ambassador to the United Nations decried the ECOWAS sanctions as 'illegal, illegitimate and inhumane' but said the interim government remains open to additional talks with its neighbors.

Further complicating matters, European officials have raised concerns about Mali's decision to bring in mercenaries from the Russia-based Wagner Group to bolster its security forces - a charge that Mali's interim government has denied.

The U.S. Defense Department, while declining to confirm the reports, described the prospect as worrying.

The U.S. suspended military training and cooperation with Mali following the August 2020 coup. 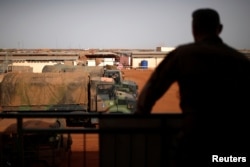 FILE - A French soldier is silhouetted as he looks out over military vehicles in Gao, Mali, Aug. 1, 2019.

Despite the drawdown, French officials insist they remain committed to helping Mali defeat terrorist groups on its soil.

'France will not abandon Mali or the other Sahel countries,' French Ambassador to the U.S. Philippe Etienne told Thursday's virtual conference on the region. 'At the request of African nations, France is continuing to combat these armed groups in the Sahel with very appreciated support from the United States.'

'Young recruits who join these terrorist organizations are doing this not necessarily because they want to engage in jihad but also because they have no other prospects,' he said. 'Stabilizing the Sahel in the long term will take time, and there's a long way to go.'

Emanuela Del Re, the EU special representative for the Sahel, said the goal, ultimately, is to 'keep Mali engaged and not isolate it.'

'We must keep the dialogue open and alive and hold the transitional authorities to their commitments,' she said.

VOA's Margaret Besheer and Annie Risemberg contributed to this report.