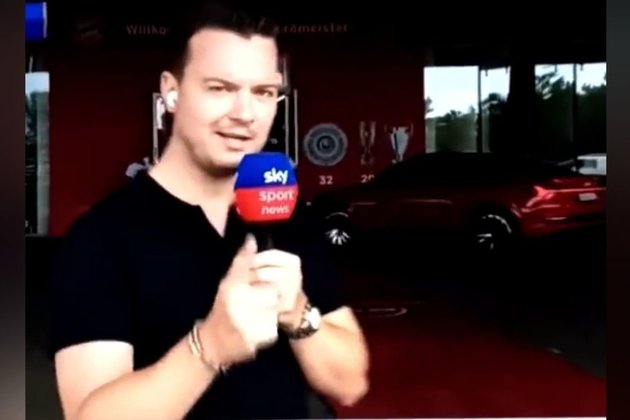 German football reporter Florian Plettenberg may well want to the ground to swallow him whole today after he made a spectacular error when attempting to get a few words with Bayern Munich's new big-money signing Sadio Mane.

The Senegal international, who is considered to be one of the finest African footballers in history, brought the curtain down on his six-season stint at Anfield when he moved from Liverpool to Munich this week.

The move is one of the biggest deals of the summer so far as the Bundesliga kingpins secured the sizeable talents of the 30-year-old forward, who will lead the line for the Bavarian club who look set to lose wantaway Polish striker Robert Lewandowski this summer.

The addition of Mane has rightfully been considered something of a coup by Bayern Munich fans, many of whom have congregated around the team's stadium hoping to catch a glimpse of their new hero.

But amid the media frenzy awaiting the Senegalese star, spare a thought for reporter Plettenberg who flubbed his lines somewhat as he looked for an exclusive comment from Bayern's latest big money import.

"He is in the car, Sadio Mane. Can you hear me?" Plettenberg says live to a Sky Sports presenter as he observes a red sports car pull up to a club building.

Plettenberg is asked to get a few words with Mane and diligently approaches the vehicle - at which point a man, who is very obviously not Sadio Mane exits.

But this key detail was lost on Plettenberg and, very briefly, the Sky television presenter a few hundred miles away.

"There he is!" the female presenter excitedly says as the rather confused looking man notices the camera.

Plettenberg, though, is late to the realization: "Sadio!"

The clip ends at that point but presumably the memory will live on long in Plettenberg's mind for the next several years.

Meanwhile, Mane's official unveiling online to Bayern's fans also hit something of a snag after the Google translation of the text was cited as being racially offensive.

The tweet, which came from Bayern Munich's official account, shows a glitzy series of video clips welcoming Mane to the club along with the text "Servus Sadio".

'Servus' is used in Bavaria as an informal type of greeting - but it was rather unfortunately picked up as being a Latin word by Google's algorithm online, which turned it into 'slave'.

Mane and Munich will no doubt be hoping these two rather inopportune moments celebrating Mane's arrival in Germany aren't bad omens for his spell in the city.