Curious Kids: what is the apex predator of the world? 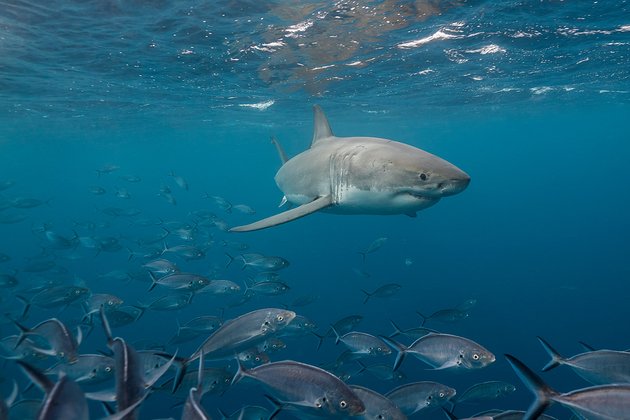 Hi Mahmood, thanks for this interesting question!

To determine what the apex predator of the world is, we first need to understand what types of "predators" there are, and what we mean by "apex".

Contrary to popular belief, predators aren't just species with large sharp teeth or fangs, hooked beaks, or razor-sharp claws. A "predator" is any species that eats part of, or all of, another living species - or in some cases its own species (which is called "cannibalism").

These animals eat the flesh of other animals. Cannibalism is a special form of carnivory, and is widespread across the animal world. It has been recorded in several hundred species, including spiders, insects, fish, birds, reptiles, amphibians and mammals (including humans).

These are animals that eat plants, but they're still considered predators. So yes, kangaroos are predators too, but they simply eat plants rather than animals. Although it appears this wasn't always the case in Australia - beware Balbaroo fangaroo!

These are animals or other organisms that live on (ectoparasites) or in (endoparasites) another species. They feed on this "host" for nutrients. Ticks, leeches and hookworms are all examples of parasites.

These are organisms whose young develop on or inside another host organism, feed on it, and end up killing the host as a result. The iconic movie Alien features such a scenario, albeit fictional (although you might want to wait a few years before watching it). This group includes species of wasps, flies, beetles and worms.

It all depends on the environment

Apex predators are often referred to as "top predators" because they sit at the top of their food chain and are typically considered to be dominant and without predators of their own.

It's important to note apex predators don't have to be particularly large. Although they often are, it's more about how their size compares with the species they interact with, and how they behave within their own ecological community.

Imagine a terrarium in your home with some plants and various insects, including a praying mantis; the praying mantis is most certainly the apex predator here.

Now imagine letting them all loose in a field somewhere. The praying mantis is now potentially on the menu for a spider, frog, bird, or other larger predator.

A predator that is below other predators in the "pecking order" can be referred to as a mesopredator. For example, wolves are often considered apex predators, and are known to compete with and even kill coyotes (mesopredators).

In areas without wolves, however, coyotes might ascend to the apex position. They are known to kill cats, which can indirectly benefit songbirds.

In Australia, dingoes are considered apex predators. They hunt and eat a wide range of animals including kangaroos, emus, feral goats and feral deer.

But dingoes, similar to many predators around the world, are frequently killed by humans.

Because our question is concerned with determining the world's main apex predator, we'll need to consider how widespread a species is.

There are some "apex" predators that are found throughout much of the world, including grey wolves, blue whales, killer whales and great white sharks.

In my mind, however, humans are clearly the overall apex predator of the world. We've even been called the super-predator!

Human impact spans the entire globe - from the land to sea, and the south pole to the north pole.

Compared to other predators, we use a much larger percentage of the world's food resources, as well as water and other natural materials. In doing so, we cause widespread environmental harm.

Humans are having a devastating effect on some other apex predator populations, threatening their chances of long-term survival.

For instance, although there are situations where large sharks have killed humans, it's estimated humans kill more than 100 million sharks per year. Many shark species are at risk of extinction as a result.

The good news is we can all make choices to help reduce our environmental footprints and help protect other species - predator or otherwise.

Read more: Curious kids: why don't whales have teeth like we do?