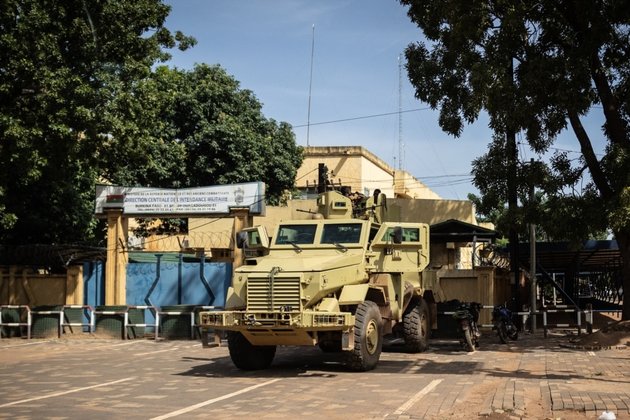 Ouagadougou, Burkina Faso - Gunshots rang out Saturday in Burkina Faso's capital and soldiers deployed in the streets as tensions lingered a day after military officers overthrew the man who had seized power in a coup only nine months earlier in the West African nation.

The whereabouts of ousted interim president Lt. Col. Paul Henri Sandaogo Damiba remained unknown, and his opponents accused him of seeking refuge at a French military base. France vehemently denied that it had anything to do with the developments in Burkina Faso, saying it never hosted Damiba in the military camp nor the embassy.

Capt. Ibrahim Traore, who was named in charge after the Friday evening coup was announced on state television, said in his first interview that he and his men did not seek to harm Damiba.

"If we wanted, we would take him within five minutes of fighting and maybe he would be dead, the president. But we don't want this catastrophe," Traore told Voice of America. "We don't want to harm him, because we don't have any personal problem with him. We're fighting for Burkina Faso."

Roads remained blocked off in Ouagadougou, the capital, where a helicopter could be heard flying overhead. An internal security analysis for the European Union seen by The Associated Press said there was "abnormal military movement" in the city.

As uncertainty prevailed, the international community widely condemned the ouster of Damiba, who himself overthrew the country's democratically elected president in January. The African Union and the West African region bloc known as ECOWAS sharply criticized the developments.

"ECOWAS finds this new power grab inappropriate at a time when progress has been made," the bloc said, citing the recent agreement that Damiba had made to return to constitutional order by July 2024.

After taking power in January, Damiba promised to end the Islamic extremist violence that has forced 2 million people to flee their homes in Burkina Faso. But the group of officers led by Traore said Friday that Damiba had failed and so was being removed.

The new junta leadership said it would commit "all fighting forces to refocus on the security issue and the restoration of the integrity of our territory."

But it remains to be seen whether the junta can turn around the crisis. Concerns already were mounting Saturday that the latest political volatility would further distract the military and allow the jihadis to strengthen their grip on swaths of the once-peaceful country.

Damiba had addressed the nation in September, claiming "our efforts have begun to bear fruit at the military operational level." Yet only two days later, a roadside bomb struck a military convoy in the north, killing at least 35 people.

This week, at least 11 soldiers were killed and 50 civilians went missing after gunmen attacked a supply convoy in Gaskinde in Soum province in the Sahel.

Friday's developments felt all too familiar in West Africa, where a coup in Mali in August 2020 set off a series of military power grabs in the region. Mali also saw a second coup nine months after the August 2020 overthrow of its president, when the junta's leader sidelined his civilian transition counterparts and put himself alone in charge.

Chrysogone Zougmore, president of the Burkina Faso Movement for Human Rights, called the latest overthrow "very regrettable," saying the political instability would not help in the fight against Islamic extremist violence.

"How can we hope to unite people and the army if the latter is characterized by such serious divisions?" Zougmore said. "It is time for these reactionary and political military factions to stop leading Burkina Faso adrift."